The economic heart of modern Brazil, São Paulo offers a startlingly different aspect from the rest of the country

The brightly lit vista at night from its rooftops, the imposing web of sky-scrapers and eclectic architecture, the swathes of street art that sweep across its city walls and the flow of energy from its busy metropolis – São Paulo is Brazil’s spectacularly electric contradiction. 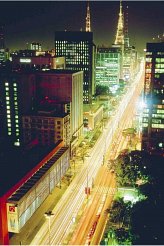 Paulista Avenue at night The city’s skyline resembles a forest of cutting edge architecture and it is not surprising that many refer to it as the New York of South America – it is even home to its very own Empire State Building, the Banespa Tower. The numerous rooftop terraces and bars are a speciality in São Paulo, taking advantage of the panoramic views and giving a sense of being lost amongst its buildings.

The international influence has played a great hand in fashioning the city we see today. With its vast ethnic diversity including large numbers of Europeans, Africans and Japanese, São Paulo’s versatile body has adapted to all walks of life – generating a culture of fine dining and global cuisine, and in particular with DOM being listed as one of the top 10 best restaurants in the world. Later into the night, clubs and bars showcase a nightlife that sees some of the best musicians and DJs in jaw-dropping venues all across town.

Not only a place to entertain when the sun goes down, São Paulo displays Brazil’s most famous artists as well as the internationally acclaimed, in some of South America’s most impressive museums and galleries. The São Paulo Museum of Art is the most high profile in the city and is conveniently located next to Paulista Avenue which is well known for its high end shopping – for those in need of a dose of retail therapy. For a summary of the contemporary art scene in São Paulo, read the article entitled ‘The Sampa Beat’ in Christie’s Magazine.

Whilst contemporary is largely used to describe São Paulo, the city has its own, rich cultural aspect, with places like The Sala, a conversion of an old railway station into a concert hall, reflecting some of the city’s former architecture.

São Paulo offers everything you need to recharge those urban batteries!

To discover more about the fine restaurants and buzzing nightlife in São Paulo, give us a call or send us a message.

Places we love to stay